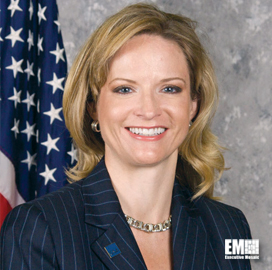 Executive Mosaic is glad to announce its selection of Casey Coleman, who became client executive vice president at AT&T Government Solutions earlier this year, as the latest member of the Wash100, the premier group of leaders who drive innovation in the public and private sectors.

She is one of two former federal agency leaders to have taken executive roles AT&T within the past year, as former Agriculture Department CIO Chris Smith joined the company as VP of technology for AT&T Government Solutions.

Coleman held the CIO role for GSA’s Federal Acquisition Service organization prior to her promotion as CIO for the entire GSA enterprise and worked at Lockheed Martin earlier in her career.

Like Smith at USDA, Coleman spearheaded cloud computing initiatives at her agency and GSA through its transition to a cloud-based email and collaboration platform containing Google tools.

Some of the features now present in GSA’s unified cloud were available in different forms prior to the move but were not used widely then, Coleman said in January 2012, according to a Nextgov report.

“They were in different places with different user IDs and passwords and different interfaces,” she said.

Coleman also led GSA’s efforts to have its employees telework from home more frequently as the agency sought to both reduce its real estate footprint and create a more productive working environment.

Letting employees work remotely helped GSA as it transitioned into a new headquarters, Coleman said in October 2011, according to Federal News Radio.