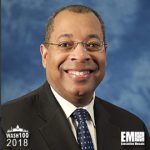 Executive Mosaic is honored to introduce Christopher Jones, corporate vice president and president of technology services at Northrop Grumman, as an inductee into the 2018 edition of the Wash100 — Executive Mosaic’s annual selection of influential leaders in the government contracting arena–for demonstrating excellence in leading, building and improving IT infrastructure.

Jones joined the company in 2004 as director of product support for the Airborne Early Warning Program, providing program execution and technical leadership during aircraft design, development, production and deployment. He oversees Northrop’s technology businesses across the U.S. and in 16 countries in support of customers such as the departments of Defense, Energy, Homeland Security, State and Interior.

In 1982, Jones joined the U.S. Air Force and simultaneously began attending the Georgia Institute of Technology in Atlanta, where after four years of rigor and basic training he received the degree in aerospace engineering that would launch him up and onward into his career. He says that the values and discipline he picked up from his time in the military as a guiding force in his life.

“You’re taught, depending on your career field, to be mission-focused,” he explained in an interview with the Baltimore Sun. “Engineering, and more broadly, a career in technology, is a good career field to be in because of the advances that are being made now.”

“When you look at the heads of companies, a lot of them have technical backgrounds,” he remarked. “The doors for minorities and women in the field are ‘definitely opening,’ as well.”

He was presented the 2016 Black Engineer of the Year Award in recognition of his leadership, community service and technical and professional accomplishments. He was also inducted into Georgia Tech’s Academy of Distinguished Engineering Alumni in May 2015 for his achievements in the field of engineering. The retired U.S. Air Force officer was also elected as an associate fellow of the American Institute of Aeronautics and Astronautics in 2015 and was cited for his engineering and science contributions to aeronautics and astronautics.

Executive Mosaic congratulates Chris Jones and the Northrop team for their selection to receive this award.